Just as Aussies stole the pavlova, we have also stolen the card game 500 and made it our own. While it is considered to be the national game of Australia, it actually originated from the US with the United States Playing Card Company holding copyright up until the 1960s.

In case you’ve been busy advocating for the pavlova to be an Aussie dessert and missed learning about 500 and even how to deal it, we have all the rules to the game here. Unfortunately, it isn’t available to play at reputable web casinos just yet, but with so many catering to Aussies, it could soon be hitting iGaming catalogues.

The main aim of 500 is to reach a total point score of 500, which is done similar to Euchre (a game said to be responsible for introducing the Joker in a deck of cards) in that the Joker trumps all.

If you know how to play Euchre, then you will pick this game up quite quickly. However, there are rule additions which makes 500 a game on its own. 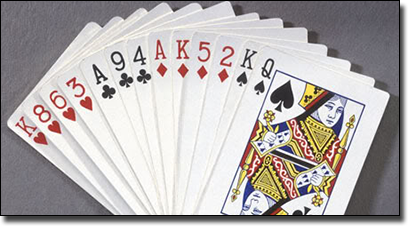 The next card ranking is the Jack of the same colour as the trump suit played, then when there are No Trumps left (or No Trumps in the beginning) the cards rank in the usual order of Ace to four or five, with the exception of the Jack. The suits ranking is outlined below.

So now we have detailed the elements of the game we are going to detail how to play. There are three parts to the game and include dealing, bidding, and of course playing.

Bidding in 500
The first bidder is the player which is to the left of the dealer, and this continues in a clockwise formation, where each player can choose to bid or to pass. The bid will indicate what you think you can take in terms of tricks.

Players can also pass, and if all players pass then the cards are discarded and a new games starts up. If just one player passes they cannot bid again in the round.

Every player bids or passes, but if they do continue to bid they have to be higher, as in bid that they will have more tricks or have the equal number of tricks in a higher suit. The following is the suit order from highest to lowest;

The highest you can therefore bid is 10 No Trumps, while the lowest is six Spades, and bidding continues until everyone has passed bar one, who ends up being the highest bidder and enters the contract, which is the leader of trick, as we continue below.

Additionally, from the list above, there are two special bids that also have value in an auction.