When it comes to live dealer casino games, it doesn’t get much better than Evolution Gaming’s range of pristine titles. Evolution’s games are operated from high-tech studios by professional and friendly croupiers, with such high quality software and innovative technology earning these interactive games a place at some of the Internet’s best online casinos. Popular variants like Immersive Roulette and Blackjack Party have ensured Evolution continue to lead the race when it comes to interactive gambling.

Live dealer casino specialist and state of the art studios

Evolution Gaming was founded in 2006 and has firmly established itself as a leader in live croupier gambling, revolutionising the way real money games can be played online. Following strict regulations set by leading gambling industry bodies, Evolution Gaming’s software is safe and supported by a dedicated back office to ensure online punters have the highest quality, true to life gaming experience as possible.

The brand only employs professional croupiers who are as flawlessly presented and courteous as you’d expect from any land based casino and as an added bonus the team of male and female dealers are all very easy on the eye. Croupiers speak many languages, so if English isn’t your first language you may be lucky enough to play against a dealer in your native language.

Games are hosted from two state of the art casino studios, the biggest of which is in Riga, Latvia and the second in Malta (a small island near Italy). The Latvian studio was custom built specifically for live dealer games, perfectly encapsulating the sophistication and ambience of a real life casino. The revolutionary Latvian studio hosts the biggest number of table games found anywhere in Europe. The Malta studio was opened to keep up with the huge demand for Evolution’s games and is just as high-end as the Riga location, just not as big.

Both studios are monitored 24/7 to ensure customer and technical support is on standby at all times, so you can rest assured that you’ll be just as well taken care of as if you were playing in a bricks and mortar venue.

How do live dealer games work?

Live dealer games work just like table games in real life casinos, the difference being that the action is streamed via high-def video cameras in real time so that you can play from home rather than having to set foot into an actual venue. To play you just need to register with a reputable online casino and deposit funds to your account – we recommend Thrills.com and Guts.com.

The games are hosted by professional croupiers and you play alongside other real players from across the world, interacting via live chat to maintain the social element of gambling for those who wish to, otherwise you can just sit back in silence and watch the results unfold.

Evolution’s live dealer games can be played via your desktop, laptop, tablet or smartphone, bringing all the excitement of real life casino gambling into the comfort and convenience of your own home.

On top of the revolutionary software, world class studio facilities and some of the best live dealers in the bizz, one of the stand out features of Evolution Gaming is the incredible list of game variants. These aren’t just your standard casino table games, Evolution has come up with some whacky and wild ways to make casino gambling even more enthralling with new creations like Blackjack Party and Immersive Roulette which have taken live dealer game play to a whole new level. 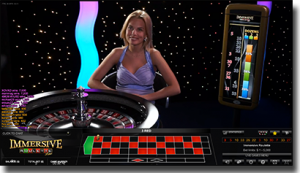 Live roulette and Immersive Roulette – every variant of roulette you could possibly want can be found in the Evolution studios, including American roulette, European Roulette and French roulette (with French rules and calls available which are typically pretty hard to find in online roulette). One of the biggest drawcards and most popular Evolution games is Immersive Roulette, a premium casino variant known as much for its high quality as for its sex appeal, where players have control over the multiple camera angles allowing a closer view of the ball, the wheel and the dealer. Immersive Roulette also allows playback in slow motion, with HD videos recording 200 frames per second and won the 2014 EGR title of Game of the Year.

There are a couple of other software developers out there who have come up with some pretty cool live dealer games, but Evolution Gaming’s features blow some of the competitors straight out of the water. In comparison to another big name in live croupier games like Microgaming, here are some of the advantages of Evolution’s gaming platform:

There is also an awesome range of fully customisable features that players have complete control over including:

As a leader in live dealer games, Evolution’s range of live blackjack, roulette and poker can be found at some of the best and online safest casinos on the Internet. Our favourite trusted venues to play Evolution Gaming titles are:

Note that a real money account is required to play live dealer casino games, so make sure to take advantage of the welcome bonuses offered at these casinos to make your bankroll go even further and really immerse yourself in the live dealer experience.

Are Evolution games safe and legal?

Evolution Gaming’s software is state of the art, providing flawlessly presented, safe live dealer games for Australian punters and players all over the world. The Evolution brand is licensed by many of the gambling industries most reputable jurisdictions including The Malta Gaming Authority, The Alderney Gambling Control Commission and the UK Gambling Commission. In testament to the strengths of Evolution Gaming, the company was recently named Live Casino Software Supplier of the Year by the eGaming Review for the fifth year in a row.

Laws regarding online gambling in Australia can sound complicated, but in a nutshell it is 100% legal for Aussies to play live dealer games as long as the online casino is owned and operated internationally, just like Guts and Thrills.

Our recommended casinos are all protected by a minimum of 128 Bit SSL (Secure Socket Layer) encryption and audited by leading gambling commissions like eCOGRA. It is entirely safe and legal for Aussie’s to play Evolution games at these casinos with real money wagers available in AUD.