The Hall of Gods progressive has just surpassed $AUD 8.5 million and counting, so head to Thrills Casino for your chance at becoming the next millionaire.

Often overshadowed by Net Entertainment’s most popular progressive, Mega Fortune, you’d be forgiven if you weren’t aware of the mythological themed jackpot slot, Hall of Gods. 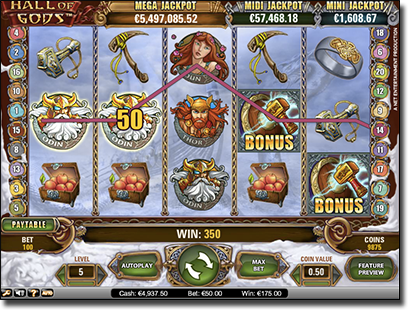 With a standard video slot format of 20 paylines across 5 reels, we see Norse Mythology come to life on this progressive, but there is more than just the three jackpots on offer.

The Midgard Serpent acts as the Wild symbol and expands when appearing on reels 2, 3, and/or 4, while the Scatter symbol is the Grave Ravens, with three of these triggering 10 free spins, four triggering 15 free spins, and five triggering 20 free spins. The free spins all have a 3x multiplier applied too.

However, the most important symbol is Thor’s Hammer. Spin three of these Bonus symbols to activate the Bonus Feature where all symbols turn into shields. You are required to smash these to reveal a prize, which will either be cash or one of the jackpots, provided you’ve matched three of the same.

Interestingly, the average amount that the Mega jackpot has paid is $AUD8.8 million, and what’s more is that the average time between the jackpots going off is 28 weeks, and 25 weeks ago the Mega jackpot was won by an anonymous player of the amount $AUD12,312,048 -so now is the time to get playing the progressive.

So if you want to be the next millionaire thanks to NetEnt’s Hall of Gods head to Thrills online casino now and get spinning.

We recommend heading to Thrills Casino to play and if you are a new player, take advantage of the $500 in matched deposits and 50 free spins on NetEnt’s popular slot, Starburst.
Show More