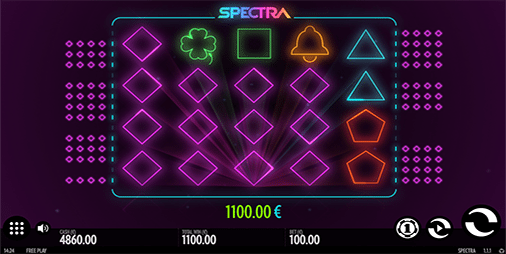 Thunderkick has added to its increasingly impressive pokies portfolio with the release of Spectra – now available for real money play at Guts Casino.

While the game oozes an ’80s electro vibe with synth sound effects and colourful, laser-lighted symbols, it also packs in a number of modern pokies features.

The 5 x 4 reel display makes for 20 active symbols per spin, rather than the 15 you get with a standard 5 x 3 layout, and 30 fixed paylines offer plenty of winning opportunities.

Best of all is a stacked wild feature that triggers a respin, during which the four-high wild stack nudges towards the centre of the reels to cover more spaces.

Those who like to play for the big bucks will also appreciate the $100 maximum bet, but punters with less voluminous bankrolls can get in on the action for as little $0.10 per spin.

Mobile pokies players need not wait around, as the Spectra online slot comes optimised for instant play on iPhone, iPad, Android and other smart devices at the Guts mobile casino.

This is just the latest in a series of innovative Thunderkick pokies releases in 2016, following top titles like Babushkas, Zoom, The Rift and 1429 Uncharted Seas.

Explore the Thunderkick range and hundreds more real money pokies for mobile, Mac and PC at Guts.com – one of the very best online casinos for Australian players.